Sometimes, the things Jesus asks of his disciples are not so much heroic as they are…odd.

You get that sense not once, but twice, in the gospel readings we heard today, on Palm Sunday. The first passage from Mark retells the story of Jesus’ triumphant entry in Jerusalem. And there’s this strange preamble:

When Jesus and his disciples drew near to Jerusalem…he sent two of his disciples and said to them, “Go into the village opposite you, and immediately on entering it, you will find a colt tethered on which no one has ever sat. Untie it and bring it here. If anyone should say to you, ‘Why are you doing this?’ reply, ‘The Master has need of it and will send it back here at once.’”
So they went off and found a colt tethered at a gate outside on the street, and they untied it. Some of the bystanders said to them, “What are you doing, untying the colt?” They answered them just as Jesus had told them to, and they permitted them to do it.

A similar scenario occurs in the opening verses of Mark’s account of Christ’s passion:

[Jesus] sent two of his disciples and said to them, “Go into the city and a man will meet you, carrying a jar of water. Follow him. Wherever he enters, say to the master of the house, ‘The Teacher says, “Where is my guest room where I may eat the Passover with my disciples?”’ Then he will show you a large upper room furnished and ready. Make the preparations for us there.”
The disciples then went off, entered the city, and found it just as he had told them; and they prepared the Passover.

When I hear these stories, my first reaction is along the lines of: ‘I’m sure glad I wasn’t one of the disciples Jesus pressed into service for those tasks.’ I can’t imagine I’d have the nerve to approach perfect strangers—and immediately impose upon them my / our material needs. What would they think? Imagine the embarrassment!

While I don’t fancy myself a denier of Christ (in the manner of Peter’s memorable display a few days later), I’m not necessarily eager to be a member of the Lord’s advance party, either. I’m a lot more comfortable if I can melt into the crowd…and do my Lord-lovin’ from within the safe confines of the congregation.

Strong enough to bear the cross alone…still Christ always invites us to participate.

But notice how Jesus seems to have selected just such anonymous disciples to carry out these two rather presumptuous tasks on his behalf. The envoys don’t appear to have come from among the Twelve. Instead, we see that Jesus sometimes commissions the ordinary among us to help him build up the kingdom.

And that got me thinking: It is indeed a pity…if we allow fear of embarrassment to keep us from becoming Christ’s hands and feet.

I mean, really: What a waste…to allow my actions to be ruled by my fragile, pathetic ego rather than by the Lord of the Cosmos!

I learned a lesson in that vein yesterday, when as it happens I was in attendance as a dear friend received the Anointing of the Sick following daily Mass. Not just I – there must have been 25 or 30 of us gathered around Anne and her family members, to pray for her healing. At the designated point in the rite, the priest paused to lay his consecrated hands on Anne. Then he did something I didn’t expect – inviting the rest of us to follow his lead…and also lay our hands on our dear sister in Christ.

Guess what: I almost held back. I was standing in the rear of the assembly…and I figured one more set of hands among the 30 of us wouldn’t be missed. More to the point, I could feel a sword of sorts piercing my heart: Who am I – in my sinfulness – to be laying hands on anybody?

Fortunately, the grace in the moment proved more powerful than my fretful ego. And in approaching Anne, I grew increasingly conscious that Christ wasn’t just offering her healing. I too was being given a gift – the gift of Christ’s sacramental presence, borne by and through my admittedly unworthy hands.

I would have missed it, though, if I hadn’t been invited to step out of my comfort zone. A good lesson, perhaps, for the beginning of Holy Week: There’s really no such thing as being an anonymous disciple of Christ.

From time to time, we’re each going to be asked to become a member of the advance party. And scripture attests that there’s certain joy to be found in saying ‘yes’, because Christ is One who keeps promises: [they] found it just as he had told them. 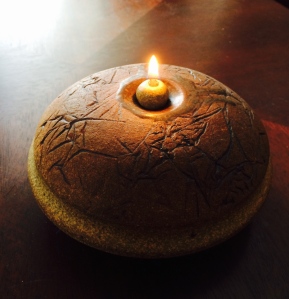