Ever notice how free Jesus seems to be when he interacts with the people around him?

I realized that today, when I reflected on the Gospel reading: The evangelist notes, rather matter-of-factly, how the Pharisees (the powerbrokers of the day) leveled an accusation against Jesus shortly after he’d cured a man possessed.

‘He drives out demons by the Prince of demons,’ they snarled.

And Jesus’ reaction? He goes on about his business – as if the accusation had never occurred.

He doesn’t get defensive. He’s not compelled to retort. Instead, the evangelist says…

Jesus went around to all the towns and villages, teaching in their synagogues, proclaiming the Gospel of the Kingdom, and curing every disease and illness.

You gotta love that about Jesus: He doesn’t waste time worrying about what other people think of him…or how he’s going to get even. He just moves on with his work. 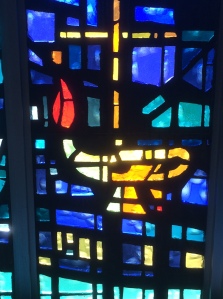 And you gotta wonder, too: How much more effective would we be at spreading the good news…if only we could become more like the Master?

…If only we were less inclined to take offense…

…If only we  had the freedom to believe that we, too, are beloved children of God…impervious to insult..

…and that when we choose forgiveness rather than retort …then perhaps we will have energy left over to help make God’s kingdom come.