There’s something about being behind locked doors that seems to make the risen Lord more apparent to me.

That’s especially true in the Easter season, perhaps because the scripture readings we encounter this time of year often have the early apostles encountering Christ in just such a setting.

Two years ago, the setting was Tamms – a now-shuttered supermax prison in southern Illinois where I and 11 of my Kairos teammates experienced a remarkable outpouring of the Holy Spirit, powerful enough to free the hearts of men who were literally bound in chains. (You can read more about that encounter here.)

This past weekend, it was Menard Correctional Center, where we began – but at least for now, have not been permitted to finish – a Kairos Weekend for about 38 of the prison’s residents. Our Kairos team was just nearing the half-way point in our three-and-a-half day program when word came that there had been a violent incident in another part of the prison. That meant – in keeping with security protocols – we immediately had to shut things down and exit the prison. 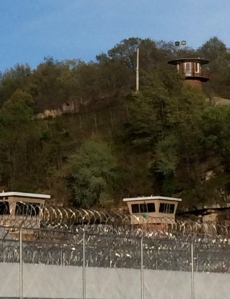 How powerful a Truth can penetrate even these walls?

It’s jarring, to say the least, when a lockdown occurs. We were in the middle of a teammate’s witness talk when the order came for the team to leave the conference area and separate from the residents. We had no opportunity for handshakes or hugs. The most we could offer the inmates was a wave from across the room, and a farewell serenade: “Lord prepare me, to be a sanctuary…pure and holy, tried and true. With thanksgiving,…I’ll be a living…sanctuary for you.”

While I certainly don’t relish the heartbreak, I realized upon further review that I was witnessing something of an Easter miracle behind those locked doors. We’d spent less than 30 hours together, but already a strong bond had grown between us. Christ was melting hearts – theirs and ours – and pouring out a full measure of mercy and affirmation in our midst.

A bit later in the day – when the team gathered in the fellowship hall of a local church to collect our thoughts and say our farewells – we decided to spend a little time sharing our ‘Emmaus stories’ from the interrupted weekend: that is, describing how we had encountered the risen Lord in unexpected ways over the past couple of days. 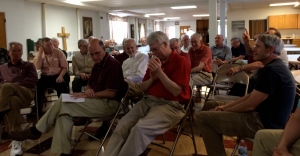 The tellers of Emmaus tales from Menard #7…

One by one, various teammates rose to tell their tales. And 40 or 45 minutes later, we were still talking…still witnessing to the miracles, large and small, we had seen inside the prison.

Not a bad haul, considering that we didn’t get close to finishing the program that we had set out on Thursday night to present. It’s almost like a divine assurance – a love note from the Lord, indicating that our disappointment is not the end of the story.

Indeed – for this witness, at least, ‘seeing is believing’: God often writes straight with crooked lines.