I’m not sure exactly what I was expecting when my friend Joe and I rose before dawn today…in order to catch a bite of breakfast with Fr. Augustine Wetta OSB.

A safe haven: Mass before dawn in the Abbey church…

Fr. Augustine – a Benedictine monk – was this month’s featured speaker for the BACoN Breakfast at St. Anselm’s / Saint Louis Abbey. And considering his vocational state-of-life, I was a little leery that he might start chanting the Liturgy of the Hours to us in Latin.

Instead, Fr. Augustine opened things up by quoting a few noteworthy Fragments From The Ancient Gospels of “The Church of a Pretty Good God.”  Things only got more fun from there.

Turns out, Fr. Augustine is quite the card…a popular speaker and author whose website pitches his current ministry like this:

Father Augustine can be booked for speaking engagements.  He doesn’t have a set fee, so as long as you can get him there, he will talk as long as you like.  The fee is whatever you think he’s worth.  Alternatively, he will Skype with your book club or youth group for free!

Since he lives at Saint Louis Abbey, I’m guessing the men’s club at the parish got the same deal as a youth group making a Skype connection. At any rate, I know I certainly got my money’s worth this morning. At times, I found myself chortling at his witty observations (e.g. his affection for tort, which basically is “cake without air”…so consuming it involves “absolutely no wasted stomach space.”)

He recounted, too, the stirring homily he’d given at a retirement home a few weeks ago. The residents’ only requirement, he said, is that the priest speaks LOUDLY. And so he intoned, “VANITY of VANITIES! ALL things are vanity! You know of course that y’all could be DEAD tomorrow!” To which one of the residents replied, “Hell, I thought I’d be dead last week!”

But Wetta’s wit, I discovered, also has a point. Having been well-schooled in the Benedictine Rule, he encouraged us to reflect on one of St. Benedict’s primary dictums: that a monk should think about death, every day. And in thinking about death, one should then consider how best to live one’s life.

“Christ is not looking for our leftovers,” he said. More to the point: “Our God is not just a pretty good God.”

That’s one reason why God gives us Lent – it’s a great time to renew our resolve to offer up something more than we’re generally inclined to give of ourselves. This might well take the form of almsgiving. “But when you serve the poor, expect them to demand an apology,” he said. “Because the ‘Christ in them’ demands the best of us.”

It’s not enough, he said, for us simply to strive to be a good person.

Rather, Lent is a time to remind ourselves, “No, I wanna be a saint!” 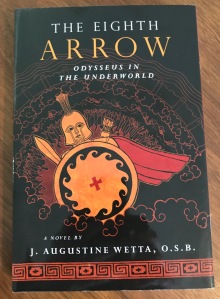 Fr. Augustine had books for sale…like this one…

…which he graciously inscribed to the author of Steadfast Spirit…
https://amzn.to/2TxNx8v