It’s only about 530 miles from the St. Louis metro area…to Gatlinburg, TN…but five years ago this weekend, I remember thinking it seemed like a million.

Where does this trail lead?

Settled into the comfy leather sofa of ‘Smoky Mountain Mist’ – the vacation cabin we’d rented for the week – I couldn’t believe what I was seeing on the Post Dispatch website: story after story, reporting on Ferguson…and the troubles brewing therein.

I knew Ferguson a little – I’d even been there a few times – the venerable suburban community less than 25 miles from my own home. So it boggled my mind to see that its streets had descended into something resembling a war zone in the summer of 2014: Military vehicles, on patrol. Officers in riot gear. Buildings burning. Citizens marching. Tempers flaring.

This is St. Louis? I thought. Our Ferguson? What the heck is going on?

From the comfort of our vacation cabin, I noticed it wasn’t at all hard for me to “take sides.” I pretty much accepted Law Enforcement’s version of the events that had led to the riots. I didn’t much care for the militarized response…but I had little compunction about deciding who was guilty, and how justice ought to be meted out.

Five years on, here’s what I notice – as the drumbreat of local media sounds, lest we forget that sad chapter in our metro-area’s recent history: There’s still a separation built up in my heart…a lot of “us” and “them” thinking that rises in me, unbidden, each time I read an anniversary story or hear a news report about Ferguson.

I guess on some level, this knee-jerk reaction…this xenophobia…just makes me human. In fact, in the first reading Sunday (ironically, from the Book of Wisdom), there’s a not-so-veiled reference to the notion that God somehow desires to take sides in the primordial contest between “us” and “them”:

Your people awaited the salvation of the just
and the destruction of their foes.
For when you punished our adversaries,
in this you glorified us whom you had summoned.

Five years on, I notice that I’m far less convinced this is how God actually desires to work in our world…that God goes about “destroying foes” or “punishing adversaries” in order to build the kingdom.

So that’s at least part of the blessing I’ve received from Ferguson, I suppose: a new way of thinking has begun to set root in my heart…and my knees don’t jerk quite as quickly on such matters as they did before.

I’m not exactly sure what to make of this gift, however. It’s almost as if, peering through the Smoky Mountain Mist, I can’t quite see a practical way for me to pass it on.

But this much I do know: Jesus expects some sort of effort on my part. As he notes in today’s gospel passage: 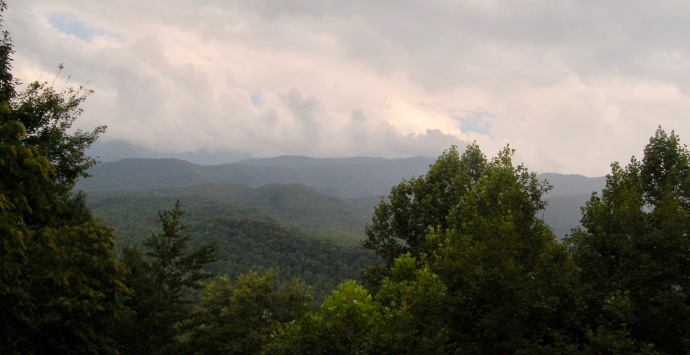 Our challenge: Finding a clear path forward…even through the mist…