Posted on February 8, 2019 by John Schroeder

I was a witness this week to technical difficulties that nearly derailed not one…but two different presentations on missionary spirituality.

The first occurred Monday morning, when a friend and I visited an area high school – where we were scheduled to speak during three periods of junior theology class about our work in Kairos Prison Ministry. The initial session got off to rather a rough start: We couldn’t get a DVD player to fire up…thereby forcing the two of us to improvise for several discomfiting minutes until the AV issues could be resolved.

The second instance happened Wednesday evening – at a different high school – just as a priest (Fr. James Kubicki, SJ) was about to begin his presentation on the spirituality of a 19th century Jesuit missionary, Pierre De Smet. No sooner had Fr. Kubicki begun to speak than the room was filled with an intense, ear-splitting alarum…courtesy of a misbehaving public address system.

In both cases, the electronic malfunctions were eventually resolved. Still, irony abounded when I heard the gospel proclaimed at Mass on Thursday morning:

Jesus summoned the Twelve and began to send them out two by two…He instructed them to take nothing for the journey but a walking stick—no food, no sack, no money in their belts.

The Good News, it seems, travels best when it’s unencumbered by creature comforts. The gospel doesn’t actually require a great deal of production value, Jesus assures us. None of the flash and pizzazz we tend to take for granted in our hyper-connected, audio- and video-supported culture.

A lesson worth pondering, I suppose.

A lesson lived, in fact, by the missionaries I encountered throughout my high-school-hopping this week.

For his part, Father DeSmet needed nothing more (we were told) than a deep and abiding respect for the dignity of the Native Americans to whom he ministered…a dignity that mirrored the belovedness he himself felt as a child of God.

As for the Sisters of the Visitation: My day spent on their grounds gave me an up-close-and-personal peek at the courageous spirit that first brought them to the St. Louis area.

Gospel women they certainly were when they arrived in 1833, unencumbered by many worldly goods, at Kaskaskia Island…to open a school known as Menard Academy.

More than 180 years later, I now find myself ministering at a place called “Menard.”

More to the point, I find myself marveling at a faith that fuels true missionaries – the women and men who somehow find it possible to abandon creature comforts, and embrace the opportunity to rely on God alone. 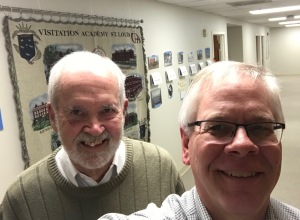 Like many before us, we stand on the shoulders of spiritual giants…