I’ve never been to Kerala, but almost every day I am blessed by a piece of art that originated there, along the southwest coast of India.

Our favorite Jesuit traveled to Kerala a few years back as part of an interfaith cultural experience, and returned with a colorful print as a souvenir for his Dad. 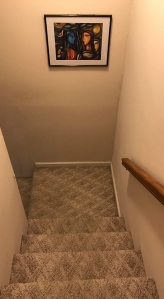 Entitled “The Encounter,” the original was painted by a Jesuit who hails from Kerala, Roy Mottan, SJ.

Father Mottan doesn’t know it, but his painting is the first thing I see when I head down the stairs to my office each morning. It depicts Jesus meeting Peter shortly after the resurrection—or so the artist’s notes say.

I’m intrigued by the open-endedness of the image: For instance, I can’t tell which of the two primary figures is Jesus, and which is the Apostle. In fact, I’m typically more inclined to see Cleopas in the scene – the disciple Jesus encounters along the road to Emmaus.

And it happened that while they were conversing and debating, Jesus himself drew near and walked with them, but their eyes were prevented from recognizing him.

The painting blesses me, by helping me to recall that Jesus does indeed desire to draw near. And that He may, in fact, be difficult to recognize.

Why? Well, for one thing, Christ is big – bigger than my mind and heart can contain, no matter how hard I try:

‘Was it not necessary that the Christ should suffer these things and enter into his glory?’ Then beginning with Moses and all the prophets, [Jesus] interpreted to them what referred to him in all the Scriptures.

At the same time, Christ is very simple, intimate and nourishing:

And it happened that, while he was with them at table, he took bread, said the blessing, broke it, and gave it to them. With that their eyes were opened and they recognized him…

Fr. Mottan’s image traveled a long way – nearly 10,000 miles, many times the distance between Jerusalem and Emmaus – to find a spot in my stairwell. But I notice that it closes the gap considerably between Kerala and St. Louis when I ponder the painting’s impact:

Then they said to each other, ‘Were not our hearts burning within us while he spoke to us on the way and opened the Scriptures to us?’

Then the two recounted what had taken place on the way and how he was made known to them in the breaking of bread.

Thank you, Fr. Mottan (and Fr. Chris!), for the daily reminder that Christ’s presence is a gift meant to be shared.

2 thoughts on “Today’s find: The Encounter”