Perhaps the feast day simply snuck up on us. Whatever the reason, we experienced a Lectionary malfunction at the early Mass today. The page was set to a Friday in Ordinary time—not to the readings prescribed for the Solemnity of the Most Sacred Heart of Jesus –and our lector initially began proclaiming a passage from 2 Timothy, instead of Ezekiel.

The mix-up got Father’s attention…so he strode to the ambo and attempted to set things right. Alas, the appropriate pages—bearing the readings for the feast day—proved elusive. So after briefly leafing through the Lectionary, Father looked out to the pews for a solution: a daily missalette. 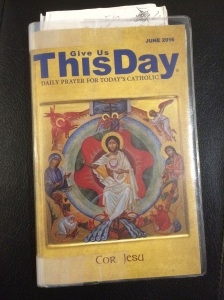 As I was sitting up front, it so happened that my copy of Give Us This Day was pressed into service. I was happy to offer it up, of course—but without my read-along crutch, I was also aware of the need to pay extra attention to the spoken Word this morning.

My effort was rewarded forthwith. Both the reading from Ezekiel and the gospel passage from Luke provided a comforting image: that of God as shepherd…offering a prodigal level of care for lost sheep (like me).

It was the middle reading, though, that made my heart soar. Holding the substitute Lectionary at arm’s length (due to its small print), Roger shared with us St. Paul’s near-mystical reflection about a different kind of “sub”…Jesus, as it were, as Super-sub:

For Christ, while we were still helpless,
died at the appointed time for the ungodly.
Indeed, only with difficulty does one die for a just person,
though perhaps for a good person
one might even find courage to die.
But God proves his love for us
in that while we were still sinners Christ died for us. 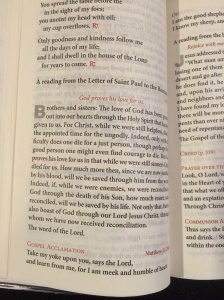 You can almost sense Paul’s astonishment at the deal he’s been offered.

“…while we were still sinners…”

And just like Paul, my heart was filled with gratitude to ponder the prospect at Mass this morning.

So often, I fumble about life…seemingly unable to make progress—my feeble efforts turning out a bit like a Lectionary set to the wrong page. Yet even in my helplessness, the offer of salvation comes.

You know what? I’m inclined to call that a bargain. The best I ever had. 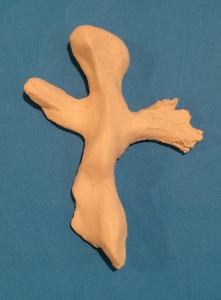 One thought on “Today’s find: Super-sub”